Pipes at the South Pole

He has always loved the sensual touch of silk on his skin. It reminds him of a hug, a sign of affection never displayed by his mother. Growing up in prohibitionist America in the 1920s meant being deprived of any show of tenderness, even more so if your parents were German and Swedish in origin. However, Hef is of a certain age now, and owing to his lifestyle he has always been familiar with physical contact. It is one of those mornings when he loves to dwell on the past. He has woken up in excellent spirits and a good, hot cup of coffee will light up his day. Before getting up his gaze rests on Crys, on her blonde hair spread over the pillow and on her left ring finger adorned with the promise made just a few months ago.   He lightly strokes her hand while she keeps on sleeping. So young, so fresh. By contrast, his hand reveals their sixty year age difference, with its brown spots and joints swollen with the stories it could tell.   His red silk smoking jacket lies over the back of the chair next to the bed, and following his morning ritual he grabs it and flings it over his shoulders, quickly putting one arm in and then the other.  He ties the belt around it and fastens it securely on his right hip. The silk whispers around him as he walks.

When he gets to the kitchen, he catches sight of another item of clothing dear to him over the years, his white captain’s cap. It takes years of experience and crossed destinies to make up a person, but it only takes a few accessories to create a personality, and Hugh, his real name although everybody calls him Hef, knows how to use them well.  For the man who has built an empire on the intuition that young people of his generation only wanted to have fun and rebel against their fathers, it takes very little to grasp the essential details that have an impact, of which another one is the pipe. Indeed, no photo taken of him in the ‘60s and ‘70s would be without his beloved pipe,  as he knew that it would influence peoples’ attitudes towards him. As he said in an interview: “Cigars had the symbolic implication of a businessman or a politician. Cigarettes could be romantic or related to crime in a film noir, but the pipe had a different quality: it was both thoughtful and adventurous, like me”.

Hef, in addition to the pleasure of smoking his Dunhill Mix 79, has also had the pleasure of being able to project a precise image of himself, essential when you decide to publish the first magazine depicting artistic nudes in 1950s Puritan America, in which articles by the best writers interviewing celebrities followed pages of naked, curvy women, in a mix of culture and rebellion, mind and body, sacred and profane. Hef has always been shrewd and a bit of a psychologist, going beyond his studies. Indeed, his outlook on life overcame the prudish, moral stance of the time, and was to find itself in the sexual revolution later on to which he may have contributed in part. A life made up of unlimited, but elegant, playful sex, the same sophisticated image reflected by his accessories that have accompanied him for years.

He is surrounded by his whole life. Looking out of the window of his Beverley Hills mansion he thinks back to the first issue of Playboy, which had displayed a colour photograph of Marylin Monroe in the nude in the centerfold of the magazine, thereby making the magazine an overnight success.

Or else while he sips his coffee his mind goes back to the time in 1954, when he was trying to come up with something original for the magazine, and he  came across the photo of a stunning brunette with mesmerising eyes – the pin-up model Bettie Page. He decided she would be the next one to pose for the centrefold of Playboy.

What a long life, lived to the full marked by bunnies, red silk smoking jackets, captain’s caps and pipes. Pity that the doctor has advised him to stop smoking due to health problems. But this does not mean that he has to give up his pipe altogether, and he still holds it like a lifelong friend, and sometimes raises it to his lips as he would with a beautiful woman. Indeed, while he waits for Crys to wake up, as on other mornings he goes to the terrace to admire the view, caressed by the touch of silk, memories and briar wood. 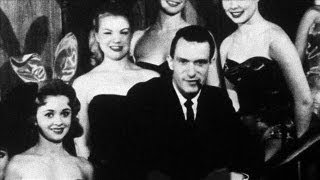