The goldfinch hopped happily from one perch to the other in its splendid white cage in front of the sitting room’s central window. Anna Magdalena had just fed it with compliments and sunflower seeds. It was so lovely to wake up with birdsong filling the room. The girl thought to herself that you could never have enough music in life, as she tried to catch the bird’s gaze and tickle it across the bars of the cage. Besides, she herself was a singer, too. Sometimes, she even thought that they conversed when she sang in her beautiful soprano voice, echoing the birdsong. She loved songbirds and for this reason her husband had given her one a few months earlier. This was to make her happy again and try to make her forget the loss of their third child.

Life and death are inextricable, as Johann Sebastian was fond of repeating, and he was well acquainted with loss, orphaned at the tender age of ten. Yet, when religion was there to provide support, everything could be seen in a whole new light, or rather a whole new sound, and a goldfinch could uplift the spirit. The cheeky, small head was also a testimony of faith, and this is why he had given it to his wife. Indeed, legend had it that the goldfinch acquired its red spot on its brow when it tried to remove the crown of thorns from Christ’s head.  And how could one forget the flute concerto by Antonio Vivaldi dedicated to the goldfinch? He had become acquainted with the Italian composer’s music when he was employed at Weimar as Konzertmeiste, thanks to Prince Johann Ernst who composed and collected music, and had brought back Vivaldi’s L’Estro Armonico from Amsterdam, which he enjoyed arranging for keyboard instruments. While he listened to Anna Magdalena singing softly to herself, his mind went back to that period in his life and the unpleasant experience he had had at the end of his stay in Weimar when he had spent a month in jail, and later his new appointment as Kapellmeister at Koethen under Prince Leopold. The young Prince Leopold was extremely enlightened for that period, and in fact spent a quarter of the court’s budget on music, and Bach, who was already a brilliant composer in that period, coming from a dynasty of seven generations of musicians, was the jewel in his crown. What a splendid period that had been!

It was also thanks to Prince Leopold that he met Anna Magdalena. At that time he was spending his second summer at Karlsbad and during days spent at the spa and musical evenings she had accompanied his compositions with her voice and graceful demeanour. As fate would have it, his wife suddenly died that same summer, leaving him a widower and free to remarry. Yet another death in the life of  Johann Sebastian, but comforted by faith and a new love he managed to carry on.

Now the married couple lived happily in Leipzig where they had moved when Prince Leopold had had to suspend funding for music and provide troops to Prussia instead. This was not too bad, considering that the work was challenging and at the same time food for his soul. His days were spent at the Church of Saint Thomas, where he composed one cantata a week. He would find a suitable text and get approval for its use by the Church authorities. He would then practice it with the Church choir. Then he would add the string and wind instrumental sections.  Finally, he would add the basso continuo. There was only time for one full rehearsal before the Sunday concert, if that. The workload was heavy, yet he still had time for his family. Indeed, Bach often composed musical pieces for Anna Magdalena in private. Writing arias for harpsichord and soprano in a small notebook was a habit he had fostered since he had met her. That morning, while he was watching her singing with the goldfinch, something happened. He was tapping his fingers against his white clay pipe as if it were the keys of an organ when suddenly the pipe fell to the ground and broke. At first he was sorry to have interrupted such a pleasant pastime, but then he suddenly had a brilliant idea. Wasting no time he rushed to the bureau where he held all the papers and took out the gold-trimmed green notebook where he wrote his music for Anna, and occasionally slipped in pieces of poetry, and started to write a poem in honour of his beloved pipe,  “Edifying Thoughts of a Tobacco Smoker”. Indeed, according to Bach each puff from his pipe was akin to separating spirit from matter to free it into the air through smoke rings. How could he not dwell on such an important idea. Meditating on the ephemeral nature of life suggested by the fragility of his pipe, which only served to bind him further to “ … this pipe, so fragrant burning/Is made of naught but earthen clay;/To earth I too shall be returning/And cannot halt my slow decay”.

It is hard to imagine that he set such apparently down-to-earth words to a cantata, as his music, is considered so spiritual and uplifting. But there it is.

If you happen to attend a Church service and hear this cantata between the Magnificat and the Mass in B minor, do not be surprised and think that the priest has made a mistake. It is only proof that everything concerning Bach is sacred and everything was sacred for Bach only if permeated by a profane zest for life, like his pipe. 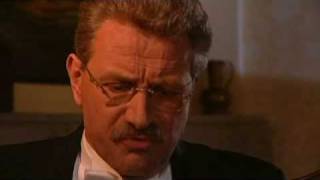